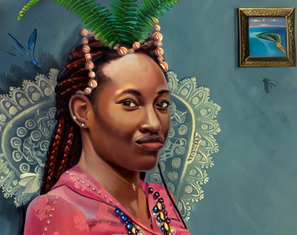 Mirror Mirror looks at contemporary women artists who focus on issues of identity – as a woman, artist, mother, wife, and/or daughter. Curated by Dr. Christine Fowler Shearer, this exhibition brings together 60 works by artists around the country. Mirror Mirror was organized by Fowler Artistic and the Springfield Museum of Art.

This project is supported in part by the National Endowment for the Arts. 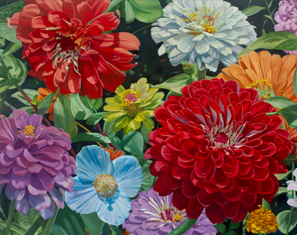 Beth Edwards meticulously captures every minute detail of nature’s foliage and flora in this series of hyper-realistic, magnified paintings of floral bouquets and garden oases. Painting with a vibrancy matched only by real life, Edwards seeks to preserve the fleeting colors, light, shadows, and negative spaces that imbue the natural world.

Beth Edwards is a full-time artist working in Memphis, Tennessee. She received her BFA from the Tyler School of Art in Philadelphia, and her MFA from Indiana University. With a career spanning over 30 years, Edwards has earned multiple awards, grants, and commissions. She has exhibited and taught in several states across the U.S., including at the University of Dayton and University of Memphis. 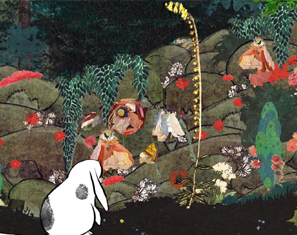 Our next collaboration with Art Bridges, Rachel Rose’s Lake Valley is a film installation combining collage, found footage, and repurposed materials. Together, the fantastical scenes Rose creates serve as the setting for a narrative tale in which a lonely, rabbit-like pet explores a nearby forest while looking for friendship. Object on loan from Art Bridges. 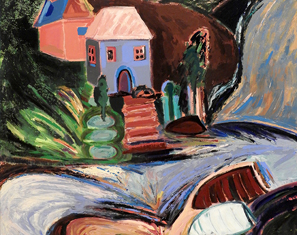 Images and language are powerful and can change the way we see the world. This new, interactive exhibition encourages us to use our imaginations as radically as possible to envision the kind of world in which we want to live. Radical Imagination features artwork from the permanent collection including colorful imagery by Nan Hass Feldman, a large scale painting by Angelo Ippolito, and rarely seen works by Elijah Pierce.

Along with the art is a selection of poetry inspired by the reading curriculum of Springfield City School District middle schools where students are exploring the power of language. 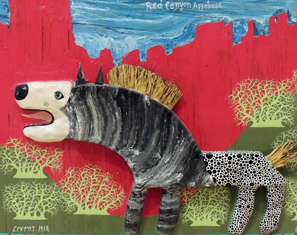 Unconventional presents several works in the Springfield Museum of Art’s permanent collection created by self-taught artists, many of whom were from Ohio. Comprising both two- and three-dimensional objects, this exhibition explores the wide variety of techniques, styles, themes, and materials that make up self-taught art. Artists on display include William Hawkins, Levent Isik, Mary Frances Merrill, and Elijah Pierce. 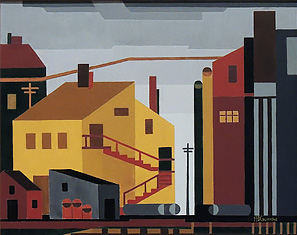 Historically, female artists have been underrepresented in museum collections and are shown at significantly lower rates than their male counterparts. During the 100th anniversary of women’s suffrage, the Museum is highlighting female artists whose works are in the permanent collection. These works of art showcase the wide range of media, subject, and technique with which female artists have traditionally worked and demonstrate how women continue to conceptually advance the art world today. Featuring work by well-known and lesser known artists alike, this show explores artistic contributions of female artists, not only regionally, but nationally and internationally as well. Artists in the show include Davira Fisher, Frances Hynes, Helen Bosart Morgan, Aminah Robinson, Alice Schille, Kara Walker, and Stella Waitzkin, to name a few.

In addition to new art on display, the Museum has been awarded a grant from Smithsonian Affiliations. Funding for this project allows us to host a Smithsonian speaker in support of their American Women’s History Initiative taking place this year.